Decimus Junius Juvenalis, better known as Juvenal, an ancient Roman writer who lived in the 1st and 2nd centuries A.D., wrote bitter satires about the Rome of his time. Bread and circuses, "panem et circenses" in Latin, referred to the free distribution of food and violent gladiator contests held in the Coliseum, as well as the chariot races of the Circus Maximum. It points to a period during the decline of the Roman Empire when Romans had lost the capacity to rule themselves, distracted by mindless entertainment provided by a dictatorial sham of a government.

We are living, in the decline of the “Pax Americana,’ (surely a satirical term coined by those who would involve us in ever more war and police actions throughout the planet), in a time of mindless entertainment and personal pleasure. As in those times deplored by Juvenal, we bow to authority without a second thought, with no concern for ethics or for the consequences of our imperial arrogance on the world before us and beyond us. We seek, and our government provides, short-term solutions to long-term problems, and in the end, we pay the price.

One of the basic strains in the ‘music’ that makes up our common undertaking is the war against labor. Workers fought and died to make the eight hour work day a staple. Through the long years of corporate-paid thugs breaking up protest and killing activists, the gains of the labor movement heralded an unprecedented time of workers' rights in this country and throughout the world. Because of the Haymarket affair in Chicago during the 1860's, when workers throughout the country held a general strike and were beaten and killed to prevent their joint organization, the greater part of the world celebrates Labor Day on May 1st. Every other country celebrates International Working Woman’s Day on March 8th, again because of the activities of working women, especially young immigrant girls, in New York and other places, seeking an end to employer abuse.

But in our video-game and giant entertainment world (panem et circenses), when more and more people are coming out of schools ‘functionally illiterate,” we have little time for the concerns or protection of labor, or for the lessons of history. Employers then and now fund and engage in atrocities. After all, then, cheap labor was available in the next boatload of desperate immigrants. These days we can always play the immigration tag game. Years later, families such as the Bush family would fund Nazi atrocities. But the populace, engrossed in its games, fails to notice how workers' hard-won right to bargain is suppressed, here and abroad, how capital, unfettered and frontier-less, now rules the world, whereas workers have gone back to subsistence mode.

Alas, after a hard day at work and play, the people must sleep.
Posted by America is not a country at 11:04 AM No comments:

Read at your own peril, Part II (Love is the most subversive force on the planet) 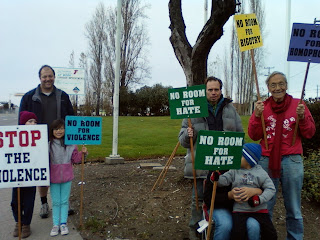 Yesterday was busy and lovely and exhausting; we started at the food container at about 8:40 in the morning, it was so cold I was sorry I gave away most of my gloves when I moved to the Bay area from the Poconos, and we had lovely milk, and a shipment of beans that will be downloaded by our volunteers in time for next Saturday. About nine families, including an older Asian woman who walked many blocks with a shopping cart to get to us, and got lost, and came when we had already closed so we reopened to give her food.

I am always amazed at the ongoing work of our people, including all the volunteers, the groups such as the South Hayward Parish, which runs this particular food pantry, and which has been giving out food and clothing and support for over thirty years, for in this 'rich' country there are always people who fall through the cracks, who need food in order to feed their families, it was the SHP that started our "No Room for Racism" vigils on Fridays, we are now doing them every other week, and it is in these vigils that I began to get to know my beloved compañero Jim. We had a vigil with children on the 31st day of December, I could not think of a better way to end 2010 so we took grandchildren, including two lovely Guatemalan children that I consider as my own, and stood at the intersection of Mission, Jackson and Foothill while trucks and cars honked in support, No room for racism, bigotry, homophobia, hatred, violence... Love is the most subversive force in the universe, the true harbinger of that universal dream we dream, a most revolutionary concept. 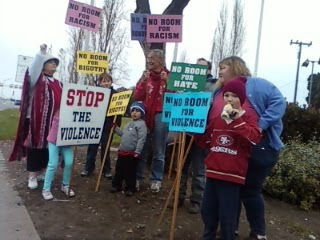 Later in the day we spent a couple of hours at the Southern Alameda's Gray Panthers, and then went to visit one of my 'sons' who is suffering not only from the pain of a work-related lumbar hernia but from the fact that the worker's comp carrier has stopped compensation payments so he can neither work nor support his family, and then I sat in on a meeting of a health-related group, working to bring Single-Payer Universal Health Insurance to California...

I came home to a sad story: a building in Oakland caught fire and three people died, and two others who are in the hospital are being released and have no place to go... they need clothing and food and beds. In a more caring environment, there would be a place they could turn to, an agency that would automatically provide.

And then there is the story of Walmart's "Love, Earth" Jewelry Line not living up to his promises, which you can read here: http://www.browardpalmbeach.com/2011-01-06/news/walmart-s-love-earth-jewelry-line-doesn-t-live-up-to-green-promises/
Unquestionably, when all you worry about is the 'bottom line,' which seems to be the enshrined first principle of this particular empire, you become nothing but a bottom feeder...

But it's a new year in a fairly new century, and I am in love with a man and a planet, and I say, let us dream on, and while we are dreaming, and praying, let us continue to 'move our feet.'

Silvia Antonia Brandon y Pérez
Presente
Posted by America is not a country at 6:01 AM No comments:

News and commentary that matter

America is not a country